If I survive this next 24 hours intact I have promised myself a cronut from the coffee shop (Campos) that we get our coffee from every morning. 9:00AM: No Lecture in the morning. It was all about the project. We spent all morning working on getting the various bits of our project working together and building the bits to strap the sensors to human bodies..
11:30AM: Bored. This doesn't seem right, I should have something more to do. Started mucking around with my own robot.
12:30PM: The students all have mock interviews with sponsor organisations such as Atlassian, Freelancer, Google and Wisetech Global where they get put through 10 minutes of a legitimate inteview process and then get some feedback. I went into an interview to get some advice from some guys from Google as to what we can do to better prepare our students for this type of experience. They suggested getting kids to practise in timed conditions. They expressed concern with not being able to get enough Software Developers of a high enough calibre, I asked if that meant we needed to try to raise the calibre of all graduates and they seemed to think that raising the volume would suit them better so that the number of candidates in the top n proportion was greater. This seems kind of backwards to me.
12:45PM: Back to Women's college for lunch
2:00PM: Back from lunch. Decided to experiment with adding a digital accelerometer to the project to detect our "bow" movement. It started looking really good...

About afternoon tea time I had to discard my idea because the Serial Monitor stopped printing out my x, y, z, status and I was keen to actually get something working - I knew how to do that with the analogue accelerometer.
4:00PM Had to pack up and head to Engineering for a lecture by the head of the program Associate Professor @DrJamesCurran on his area of research and all you ever wanted to know about entrance scores to uni. (Arghgh! I want to start fixing my accelerometer issue but Arghgh I want to see the lecture... off I went to engineering.) Ever wondered why Google translate doesn't do a brilliant job of translating between languages? It turns out it's really hard! Go figure.
6:00PM: Dinner

7:00PM: Back at the labs. 2 hours to show a working demo (we can continue to tweak after that). I got the bow working with the second accelerometer and then went down to engineering to find out about the DropBears team in First Robotics. (https://firstaustralia.org/get-involved/start-frc-team/) #AllTheCoolThings
9:30PM: We got a bit of an extension!  It now appears we have jump and punch being detected and sending te correct serial messages to two robots. W00t! Now to add in my two moves and we'll have a fully functioning game. We even have really pretty light up paper light diffusers.
10:30: ROBOLYMPICS! 3 embedded groups
split into 10 embedded games compete for the title of "We made the Python kids look most silly!" It's a fierce contest...

Massive Success! Our team's robot competition "Bop it!" was a roaring triumph. The Python teams competed to race the robots to the finish line. Our robots lit up with a red, green or blue light which indicated the move the competitor needed to make (punch, jump and arm raise from their side respectively). If they got the move correct in the time allocated their robot went forward and if they didn't, their robot went backwards. The aim: get to the finish line. It went off brilliantly and victims (um, I mean competitors) were jumping and punching and lifting with abandon. I've attached a video below. I was really proud of our team and we managed to debug the last of our glitches (that the robots appeared to go backwards randomly at some point in time) while everyone was playing - overflow error - newbie mistake : ) 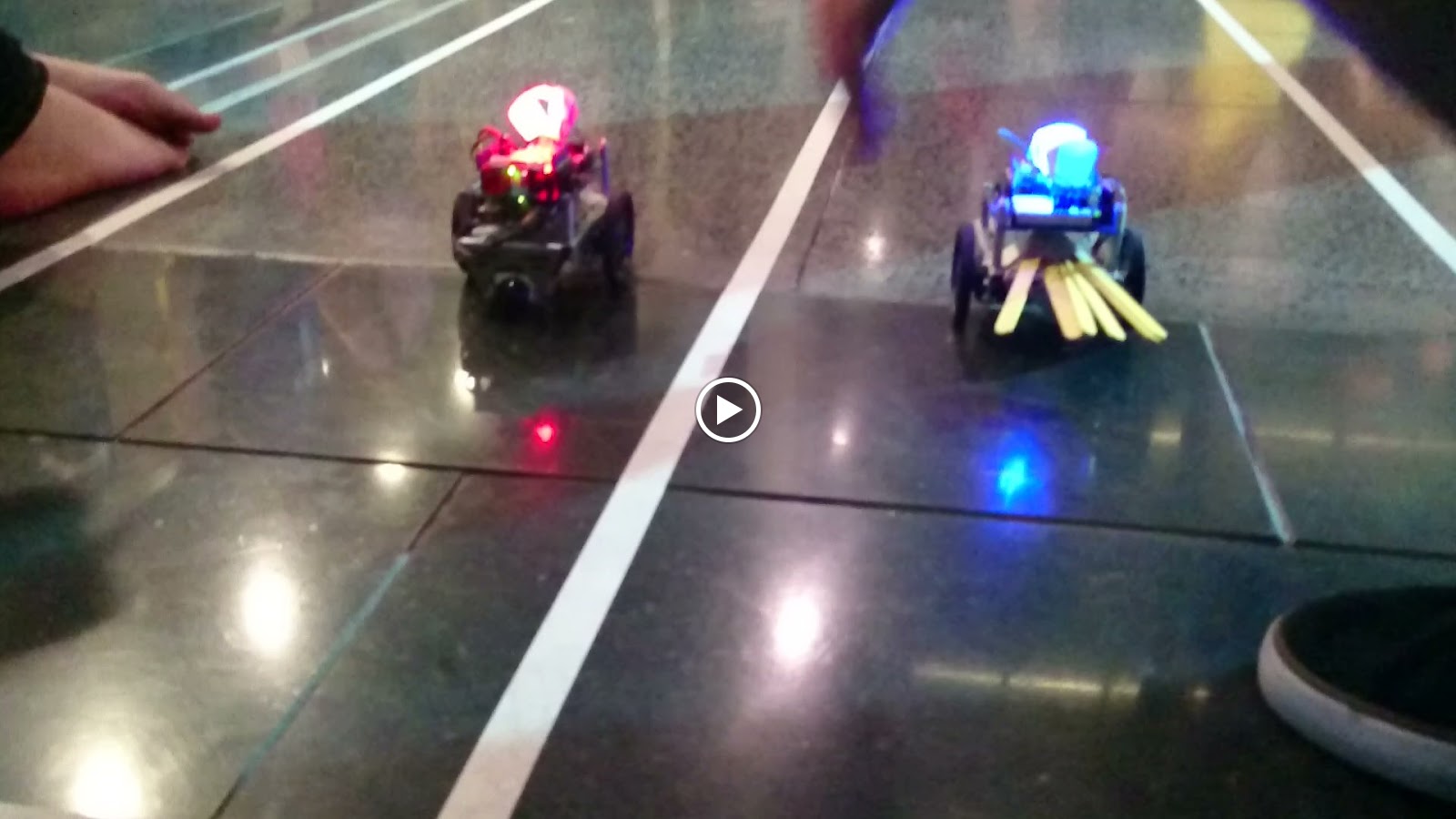 12:30PM: Pizza! After the Robolympics we had a pizza break. So... much... food... We then did a tidy up of the lab to give it to the web teams who are still working on their projects.

Jim's Lecture: At 1:10 we had our final Arduino lecture for the program. We can apparently use any code we like if we have some functions that will upload it to the boards - so excited! I can use something that knows how to format code properly. We then did an overview of some of the available boards.


We then talked about possible future projects and Jim told us about his projects he uses with his sailing. "Sometimes you just have to do the practical thing that works rather than doing the best possible thing. Wires are awesome because they work."

2:20AM: Tutors embarrass themselves There is a tradition at NCSS that the tutors put together an entertaining video as a surprise for the campers at 2AM. This year there were three and a returning students video. They were great! Another rason to come if you ever get an opportunity. Things go downhill pretty fast after that and it's not long before people are heading back to the college or falling asleep on the floor.