It's the last day and night before the all-nighter. Last year I lasted until 3:30AM on the all-nighter. There were a bunch of the kids that made it but many of them slept under desks and that's just a little cheating. Not sure I'm going to make even 3AM this year. I'm already so tired! Expect today's nites to be shorter and maybe less lucid than previous.

Lecture 10: DAC
We talked about the trade-offs of Accuracy vs Cost vs Size of components. The plot precision is obviously limited by the clock speed of the sampler and the time intervals cannot change within the samples. Emma gave us some code for writing our own Digital to Analogue converter using PWM (some of which we've encountered before) that would handle two PWMs. She then went on to signal processing and talked about sliding window average using a set of data in an array with a moving starting pointer. (This was pretty geeky stuff.)

Lab 9: Team meeting. What is Minimum Viable Product? We discussed how to scale back our "Bop-it" idea so that we can have something made and into testing and then move onto the bits that are less necessary. We managed to split our team of 6 into 3 sub-teams, each with a task for the day. Team 0-A were working on detecting a jump spike on the accelerometer, team 0-B were working on getting the robot to take a data stream and move accordingly and team 0-C (my team) were working on accelerometer calibration (to remove noise) and then working on an arm lift. Despite a teacher meeting interrupting our play and having to barricade our circuitry so noone tried to pack up before we were finished, we did get it done! 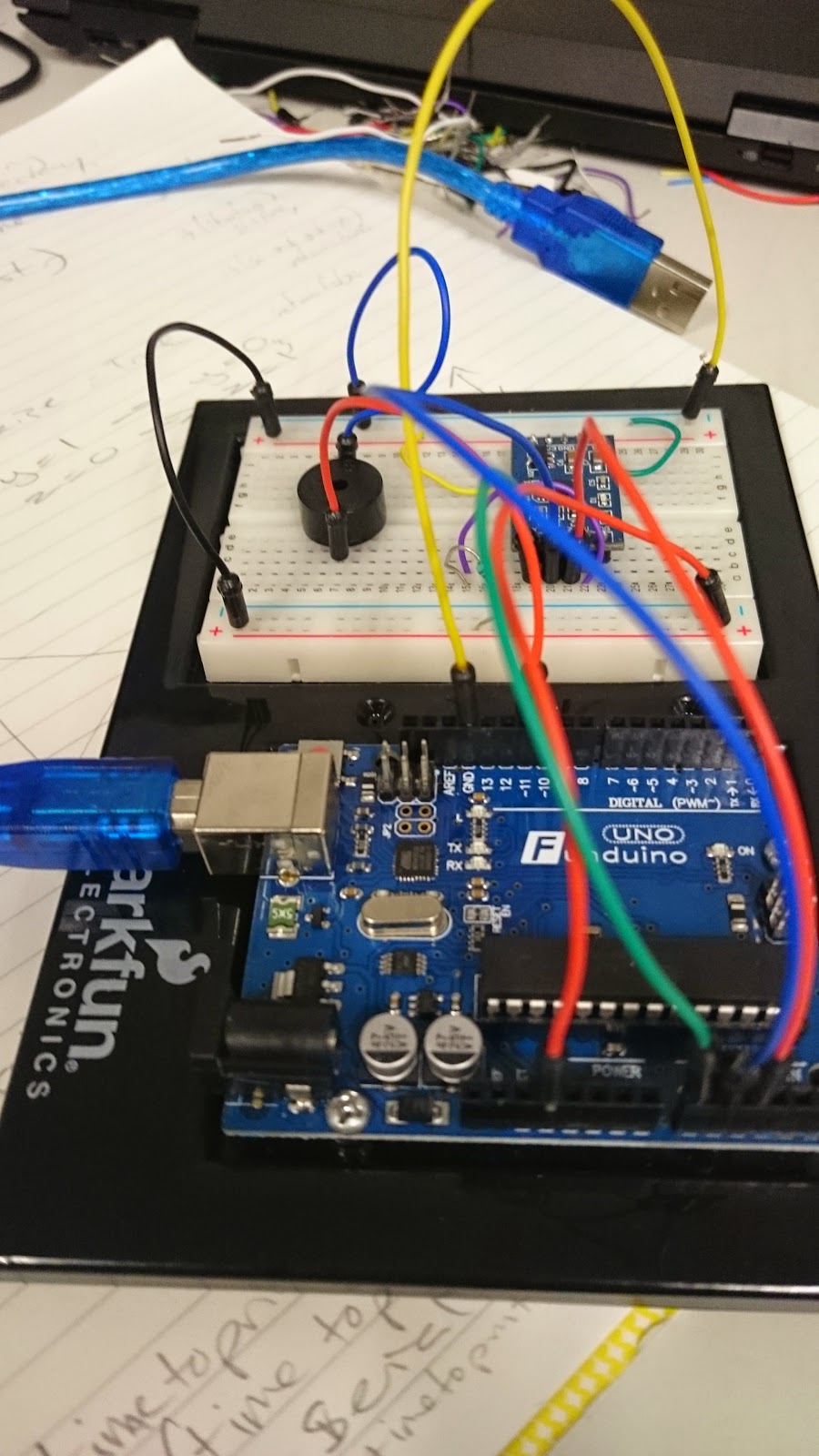 Lab 10: More of the same. It's all about the project from now on. I was pretty happy that I actually got the calibration and arm raise detect working. Electronics is still frustrating! You can see a buzzer on my breadboard that beeps an A above Middle c when you get your hand into the starting position and then plays the c above middle c (ish) when you get to the correct finishing position. Yay!

Interesting Stuff Learned: Windows 8.1 completely failed to work on me twice so I ended up using Fedora (they have dual boot in the labs). This was interesting and now that I'm a crack linux user I can, of course, feel superior to everyone around me. : )
I also learned about using Git with terminal. I have used github before but not quite so text-basedly. I'm so #l33t

Evening Activity: The Simulation: This is an evening of the geekiest theatre sports of all time. The teams compete to do recognizable renditions of computing processes in timed conditions. It's bedlam! In an effort to maintain full dislosure, I missed it, going out to watch Into the Woods at Randwock Ritz with my family. It's been pretty hard being without them this year so the visits are very welcome.

Murder Game 2.0: still undead. I think everyone's too busy/tired to be playing.