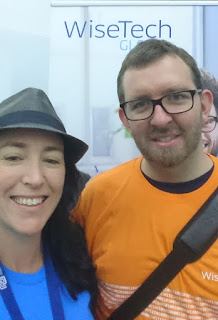 8:45 - Intro and Welcome from Richard White. His theory of scheduling "All gains are lost and all losses accumulate". Truer words were never spoken so we are encouraged to keep things snappy.

9:00 (ish) - #AllTheFood! Split into two halves and the other half went on tour while our group ate breakfast, crepes and/or waffles... So... Much... Food!

10:20 - Talk by the Wisetech Global former NCSS students. Basically Wisetech is awesome and NCSS students are awesome especially when they work hard to develop their opportunities.

11:35 - dropped in the city ready for more food, umm, I mean tour and presentations

11:40 - presentation from Jurgen Spangler about the overview of Atlassian and its vision.

12:00 - Q and A panel with Atlassians. A brilliant chat with great people, the students were really engaged - particularly when they found out that an impulse to hack people's buggy software is a great kernel for an exciting job. 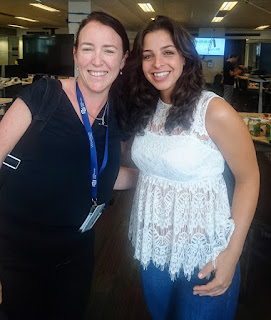 12:30 - Pizza and Tours. I was completely spoiled with a personal tour from a wonderful former-student. We avoided the crowds and I saw her desk and I then had an undignified fan-girl moment because she's in the same team as Lily Serna. After I may have squealed a bit Lily was kind enough to have her photo taken with me. I'm so proud to have had even a small part in inspiring a former student to work towards such success. We're going to stay in more frequent touch.

1:30 (ish) - Back to the buses for the trip to Google. I have well and truly had enough of buses by this stage. I get a little motion sick.

2:00 (timing is losing precision) - We went to a Google building I'm less familiar with and had some fantastic mini-talks from NCSS alumni Googlers. Clever people! Before taking in the amazing office complete with Monorail meeting rooms and wall pods. No wonder these kids want to go into tech jobs. Soft drinks and icecreams for all! 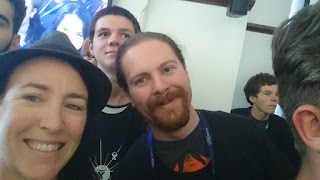 3:30 - Most of the group went back to Women's college for a math comedian and "returners" headed to CBA.

4:00 - Arrived at CBA's shiny offices to talk to some of the cybersecurity team. What a cool job. It's a bit of a shame that we were a pretty tired by then. Note to self: I apparently talk more when I'm tired.

5:15 - Back on the bus *sigh* for the last time and back to the college to get cleaned up and somehow de-tired for the formal dinner.

6:30 - Managed to find my sparkle - it was hidden in the quiet on my balcony - and I got frocked up and came down to pre-dinner punch and mingling. This is clearly going to show my age but the kids look so pretty all dressed up. 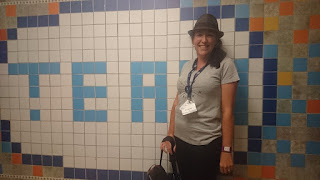 7:00 (ish) - I had the most wonderful night. It's all a bit of a blur actually (no alcohol was consumed!) I really like hanging out with bright and passionate people and I sat with a really great bunch. Our industry Tutor was a fabulous woman who has done just about everything and has recently been hired by one of our sponsors just to investigate cool stuff they should look into as entrepreneurial opportunities (#topjob). The best thing about talking to great people is there is no such thing as small talk, everything is a great topic of conversation where you're either listening intently or sharing carefully thought through opinions.
We also had the traditional "back of the envelope" calculation activity. This is where James Curran gives us an impossible question, a pen and an envelope and you use what small amount of information you have as a group and you're combined deductive or inductive reasoning to come up with a well conceived estimate and then he reads the answers from each half-table from highest and lowest alternatively until one remains and that is determined the "winner". He then reveals the best estimate research can supply. The interesting thinking here is that often the two numbers (the best estimate and the median answer) are eerily similar because reasons (there is actually theory here but I don't really have the time or space to explain it but it's worth looking up if you're interested). I love this game... usually and it's a great way to get a group to talk to each other. But tonight I was actually so enjoying the conversation that it was almost a distraction and I have to admit our team "mailed it in" somewhat. (Never apologise for a pun!)

Anyway it was a full-on day and then a scintillating night and I feel ready to help the students attack the projects tomorrow. Also cryptography competition - I have previously not dealt well with the difficulty of the crypto comp but plan to smash it tomorrow, or at least enjoy it : )
Posted by Amanda Hogan at 10:42 PM